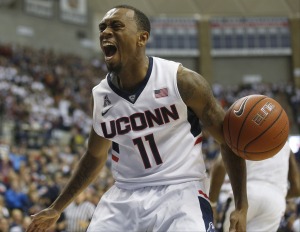 Yes, we lost. And yes, it was heartbreaking. But no matter how bad it hurts it’s always better to get these games out of the way in November than March, just ask Pittsburgh. There is really only one way to look at this game: we shot 30% and lost to the #7 team in the nation on a buzzer beater. As always, there is room for improvement though the loss itself is more shocking than troubling. In my opinion, the only true cause for concern stemming from Sunday? Ryan Boatright’s ankle.

Although we made a remarkable improvement in the second half, Texas scored far too many points in transition. Many of these points came from long rebounds off missed threes which again, leads back to the 30% from the field (3-16 3PT). SCJ (Sam Cassell Jr) was a main culprit. I’m not worried about the missed shots, this was his first big game at Gampel, that is to be expected. He needs to keep shooting and without hesitation. However, there were a few instances where he leisurely skipped backwards observing his shot as opposed to crashing for the long rebound or rotating back to prevent the fast break. If A). crash for a long rebound, B). rotate back to prevent the break, and C). DO EITHER JUST DON’T STAND THERE, the answer is C everytime.

Please stop. Daniel Hamilton stop. Ryan Boatright stop. Everyone stop. I realize Boat has a 35″ vertical which allows him more time than most to bail himself out, but still stop. Not only do jump passes hurt the spirits of your fans and your assist/TO ratio, they also hurt your teammates. With 14:18 to go in the second half Boatright’s jump pass was intercepted by Javan Felix who drew Kentan Facey’s second foul on the ensuing fast break. Granted, it didn’t have much impact on the outcome of this game but on a team short big men (ha), it could in the future. We can’t afford to get our bigs in foul trouble, especially when it’s bailing out a guard on a jump pass.

Terrence Samuel as a player is NOT in the “bad” section. The reoccurring Terrence Samuel “drive-with-my-head-down-into-7-footers-with-no-idea-of-what-I’m-going-to-do-with-the-ball” IS in the bad section. I love that he can beat guards up front and penetrate the defense but his NYC instinct takes him all the way to the rim. Pull up Terrence. Develop a mid-range game. Take the mid-range jumper so Myles Turner doesn’t get 5 blocks and Brimah can lead the country.

The defensive intensity in the second half was classic UConn, that is the only way to describe it. Daniel Hamilton disrupted Texas from the start and finished with two steals and multiple disruptions*. At one point in the second half he implemented his own personal press and only relented when KO furiously motioned to retreat. Nolan, Brimah and Facey played outstanding post defense on imposing big men Myles Turner and Cameron Ridley. A few of my favorite defensive plays:

*Disruptions are not a recognized statistic but should be.

Kentan Facey is quickly becoming my favorite player on this UConn team- turning in another solid effort with 4 points/8 rebounds. Facey crashes the boards with reckless abandon and unlike other UConn bigs- he finishes! You can’t underestimate the value of a player who can get himself involved in the game without having his number called- ever. With 7:30 to go in the second half, Facey collected a SCJ miss and dished to Boatright for a reverse layup that would be our last field goal of the game. With a struggling offense, those are the types of plays you need to get momentum swinging. Not to mention, Facey, at a mere 206 pounds out-rebounded both Turner (6-11, 240) and Ridley (6-9, 285), COMBINED!!! Obviously Facey is still a project and has a long way to go but I am impressed with his production thus far.

Daniel Hamilton is the real deal. I have been impressed with his offense since the beginning but thought his feet were slow on defense. That changed yesterday. Hamilton is clearly more suited to guard the SG/SF position and proved that with his relentless hounding of Holland and Holmes. He is also tough, UConn tough. After taking an elbow to the nose midway through the 2nd half Hamilton returned with less blood but the exact same defensive intensity. He can finish too- Hamilton scored 9 of UConn’s first 11 points in a game where points were hard to come by.

Ryan Boatright turned in another emotional performance leading the team with 24 points. Yes, it took him 21 shots but aside from a lone high-arcing three with a hand in his face, none felt forced. Boatright is doing a little bit of everything for the Huskies -averaging 20 points, 6.2 rebounds, 4 assists and 1.6 steals- just as Kemba in 2011 and Shabazz last year. In addition to bringing the ball up the floor against an athletic press- that’s a lot to put on one man’s shoulders, especially when they are supported by only one good ankle. Speaking of the ankle, no news as to whether Boatright will suit up Friday vs Yale but keep that chicken leg in your prayers. We need Boatright and we need him healthy.

The Play: Texas stacks the left side of the court with point guard Javan Felix on the weak side guarded by Terrence Samuel. The #1 option on the play, Myles Turner, slips the screen (see below) for Jonathan Holmes and runs to the rim. With the long arms of Brimah taking away this option, Texas looks to option #2- Holmes. Holland sets a backscreen on Daniel Hamilton who gets caught behind Boatright leaving Holmes wide open in the corner. Brimah, honoring the freshman Turner, cannot get out in time and Holmes knocks down the three for the win. See below:

* A screen slip is when a player gives the illusion of setting a screen, only to slip the screen just before contact. This tactic is used to catch defensive players who cheat early on a screen. If you need examples watch the Russel Westbrook – Kevin Durant combo in OKC.

The Aftermath: Miscommunication or broken ankle?

Daniel Hamilton on the last play: “We switched everything up in the huddle. I guess the guy behind me (presumably Boatright) didn’t know he was setting a back screen so my guy ended up getting the open shot.”

Ryan Boatright: “When I realized my man was setting the screen, when I planted to go back the other way, it just turned and it gave out.”

Hamilton’s comments lead one to believe Coach Ollie instructed players to switch on screens in the huddle prior to the last shot. Hamilton’s actions support this theory as he allows himself to be screened, a direct contradiction to his fiesty defensive play all game. According to Boatright his ankle turned as he was planting to switch onto Holmes in the corner, the same ankle he had twisted earlier in the game.

The Verdict: Texas sunk Captain Boatright. I guess this is karma for all the ankles Boatright has broken in the past…