This is a story you do not know that taught me to crave criticism in a way I never expected.

The summer before Kemba Walker was to lead UConn basketball to the Maui, Big East and NCAA Tournament Championship on his way to becoming a first round pick in the NBA draft, he was the new leader of a young team that entered the season unranked. Although he had demonstrated flashes of brilliance in the past, Kemba’s speed was out of control leading to poor possessions in transition. As a program that thrived off transition basketball- with Kemba the primary ball handler and decision maker- the coaching staff had to eliminate poor possessions, costly turnovers and unnecessary fouls that out of control play can bring. At the time, I was working as a video assistant with the men’s basketball program, tasked with compiling game clips of Kemba, coded by play result.

If you are unfamiliar with New York City point guards, a New York City point guard is defined by grit, tenacity and a desire to get to the rim under any circumstance. Not only was the criticism Kemba received from the coaching staff critical, it was critical of the style of play he was built on. Fast forward one year and if you follow me, you are now well aware of how this story goes. UConn won three tournament championship’s and Kemba produced one of the best seasons of any college athlete, ranking among the nation’s best in many statistical categories. When you analyze the stat line in the context of the criticism received, Kemba’s FG% improved while taking more shots, his Free Throws Attempted increased, and, his Turnovers and Personal Fouls decreased while playing more minutes. This is a stat line reflective of better possessions and decision making, or, the intended improvements in the criticism from the coaching staff.

I saw that even when faced with critical feedback of a career-changing nature, Kemba received the criticism, identified the lesson and made the intended improvements. Criticism led to improvements which transformed an unranked team into Champions.

This experience caused me to reflect on my own response to criticism. I immediately knew my reaction would have been much more defensive and I assume many others out there can relate- critical feedback of any variety can be devastating. But, after witnessing firsthand the success that originated from criticism, two questions kept popping into my head.

What criticism was I not receiving and what type of success was that keeping me from?

This story taught me to crave criticism as you cannot lose by receiving criticism. It is actually the only way to win…

We often find ourselves in disbelief when a quarterback throws an interception on consecutive possessions or, in the case of my mom, when a basketball player consistently misses free throws. It outrages us to the point where we question their ability and suggest a benching or even release. Are we open to the same criticism we give out? Are we as emotional about our own performance when we receive the same score in the same categories on a yearly evaluation or continue to commit the same weekly errors on the same weekly reports? Most importantly, are we improving?

If it hasn’t already the current digital transformation will soon create disruptive changes to industries that will have a significant impact on the future employment landscape, critical job functions and skills in demand. According to the World Economic Forum, in many industries and countries, the most in-demand occupations did not exist 10 or even 5 years ago. The same report estimates that 65% of children entering grade school today will work in a job that is yet to exist. It is difficult to pinpoint exactly which industries these nonexistent jobs will infiltrate, but it is impossible to ignore the possibility.

In times of change, improvement is key. Change brings competition and improvement is necessary to stay ahead. The ability to receive feedback- whether that be from a manager, colleague, market or industry trend- and make the intended improvements will help decide who wins. Here are three common roadblocks to translating criticism into improvement and how to start addressing them.

Criticism, or critical feedback, can help us develop the humility, awareness and reflection necessary to become professionals in our field and reach our goals. Unfortunately, far too often it is absolutely devastating to receive criticism. Your face gets red, you start to sweat and your mind races. According to one study, our ego can become so defensive in these situations that it controls the flow of information to our brains. Let that sink in, our ego can actually censor what we hear. I am sure we can all painfully recall our reactions to these moments, it is our inclination after all! But if we never hear criticism, we never improve. Although this inclination may not be your fault, you can counter it. You can change your response to criticism from defensive to open or take the “critical” out of critical feedback if you will. To start, let’s redefine our definition of criticism to manage the negative emotional reaction.

If you have ever played sports (or hopefully read the introduction) you can understand the value of reviewing film with coaches and teammates- it keeps us honest about our performance. In 2014 Microsoft reached an agreement to add Surface Pro tablets to NFL sidelines providing instant video feedback/analysis to coaches and players (among other uses). At the time I was working with the Pittsburgh Steelers, on the sidelines for the debut of the tablet, responsible for distributing the tablet to players and coaches for review after each possession. No, I did not interact with Ben Roethlisberger aside from one particularly intimate moment when he overthrew a trash can and hit me with a piece of tape (I actually got a picture of this encounter, it’s at the end). 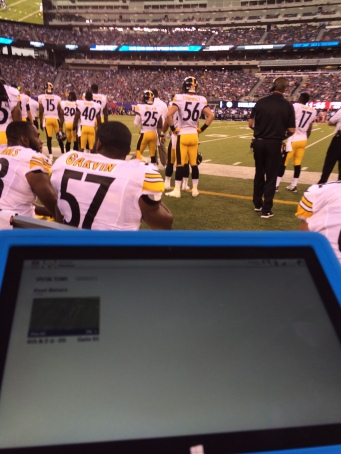 Think back to the last NFL game you watched. How many times did the camera pan to players huddled over a Surface Pro, watching clips from the last drive? It is a familiar scene but it’s important to acknowledge why they are glued to the screen. Critical feedback. Athletes at the highest level have trained themselves to receive feedback to the extent that it’s instinctual once they return to the sideline. Professional athletes are constantly seeking critical feedback, evaluating their performance and making improvements- this is how they continue to perform at a professional level. They accept criticism as the only means to improvement and more than just crave it, they seek it out. When you witness this scene in future NFL broadcasts it will hopefully serve as a reminder of the new definition of criticism.

If we recognize the importance of reviewing game tape, why don’t we do the same at work? If our objective is to be the professionals of our industry, why do we automatically become defensive and passive when presented with criticism? Work to redefine criticism as necessary to improving yourself to stay ahead of the competition, becoming the best version of yourself or reaching your potential. If you are competitive, view it as a challenge to improve. For those who are particularly bad at receiving it, expose yourself to more of it. The more feedback you are exposed to, the better you will become at managing the negative emotional reaction and translating that criticism into a lesson and improvement. Once you train yourself to accept that negative feedback leads to positive outcomes, you will begin to enjoy it and eventually crave it. You just need to be open to receiving it.

We need criticism. If we never hear criticism, we will never improve- it can be as simple as that. Athletes at the highest level have trained themselves to receive criticism due to the nature of their profession. We bear witness to their constant adaptation of critical job functions to win the next play or beat the next opponent. If they fail to receive criticism and make the intended improvements, they are replaced. Our industry could experience a similar need to adapt critical job functions to compete in the not-so-distant future. Would we survive in that competition, or, would we be replaced? Improvement starts with receiving criticism. Redefine it to manage the negative emotional reaction and expose yourself to more of it.

We aren’t getting criticism…

There are studies showing that when co-workers criticize us, we tend to avoid them. It is much easier to go straight to those who agree with us to receive reassurance. This is known as our support network. Organizational Psychologist Adam Grant has worked with organizations such as Google, the NBA and the U.S. Army on improving success at work. He suggests we take advantage of a different network, a challenge network. This network is the group of people who push us to get better by giving the feedback we don’t want to hear, but need to hear. This process of self-discovery leads to what is actually true, not what we believe to be true. The hard truths. When we become aware of how bad is the bad and how good is the good, we now have information we can work with.

We don’t know what to do with criticism…

A habit we can all develop is what psychologists call the second score. In this context, I like to think of it as your reaction score. When someone gives you feedback, they have already evaluated you- it’s out of your control. Instead, every time you receive feedback, rate yourself on how well you took the feedback- your second score or reaction score. Remind yourself that regardless of the content of the feedback, the major element to grade is whether you are open or defensive.

For example, you cannot control the C you just received on your performance review, however, you do control the current grade you receive for how well you took that C. When your second score proves you are open to criticism, you can then act on the intended lesson and improve. Practice the habit of hearing criticism and immediately asking yourself “what’s the lesson?” The answer leads down the path to improvement.

The dynamic, evolving world we live in is marked by the digital transformation. In fact, the Surface Pro example discussed earlier represents a digital transformation in the sports industry. This transformation is constantly reshaping how we live, learn and work while creating disruptive changes to business models that will have a profound impact on the future employment landscape, critical job functions and skills in demand. The ability to receive feedback -from a manager, colleague, market or industry trend- and make the intended improvements will help decide who wins.

It is difficult to pinpoint the impact of the digital transformation on job functions and anticipated skill needs. However, with the pace of change accelerating, we must recognize this trend to stay on top of it. In times of change, improvement is key. The most effective way to improve is by opening yourself to receiving criticism, identifying the lesson to be learned and translating that feedback into improvement.

See you in the future.

Problem: We aren’t getting criticism…

Problem: We don’t know what to do with criticism…

As promised, my moment with Big Ben.