Andre Drummond made two huge plays in the waning seconds of Friday night’s game against the Indiana Pacers. First, deadlocked at 96-96 with :24 seconds remaining, Drummond coaxed Pacers All-Star big man Roy Hibbert into an offensive foul. Then, on the ensuing possession, Drummond followed a Brandon Jennings’ miss for his 16 point on his 16 rebound, giving the Pistons 10 wins in their last 12 games.

I have not been shy in proclaiming Drummond a Hall of Famer, barring injury. His athleticism is so freakish, he could completely redefine the center position in the NBA, similarly to how LeBron James redefined the small forward. In just his third season, at a mere 21 years old, Drummond is averaging roughly 12 points, 13 rebounds and 2 blocks per game. To average these numbers, with a game so raw he barely has a viable post move or sense of defensive positioning, is a scary thought for Eastern Conference opponents.

Though impossible to imagine at this point in time, Drummond’s athleticism will eventually fade. His ultimate reputation will be decided by technique, development and execution. As SI.com’s Rob Mahoney puts it in his article linked below: “He will always appear capable of more, because in some sense he’s capable of almost anything.”

Ladies and gentlemen, watch out for Andre Drummond.

Rashad “The Dagger” Anderson used his deadly 3 point stroke to lead UCONN to the 2004 National Championship and now, that same deadly stroke is leading him to clubs all over the world. In his 7 year professional career Anderson has established himself as a premier scorer in Europe which should come as no surprise to UCONN fans. Undrafted in 2006, Anderson played briefly for the Washington Wizards summer league team before landing with Egaleo BC of Greece. After a jump across the Adriatic Sea to spend the 2007-08 season with Italian club Livorno, Anderson signed with Snaidero Udine of the Italian A League (Jerome Dyson’s current league) where he led the league in scoring at 18.2 points per game. This was no small feat considering the league featured future NBA players Brandon Jennings and Gary Neal (Anderson lit up Jennings for 37 points when the teams met head to head).

Anderson’s play in 2009 was noticed by NBA scouts and he was selected by the Iowa Energy in the 1st round of the 2009 NBA D-League draft, only to be waived months later. Anderson returned to Europe where he bounced from Italy –> Latvia –> Iran –> Lebanon –> Venezuela –> Lebanon from January 2010 to April 2013. Once again selected in the D-League draft, Anderson spent 9 games playing with the Canton Charge teaming up with former Big East forwards Arinze Onuaku (Syracuse) and Kevin Jones (WVU). Cut just before 2014, Anderson signed with STB Le Havre of the French Pro A League giving a much needed scoring boost to the last place club. In his first game, Anderson led Le Havre with 17 points in 28 minutes off the bench in a losing effort. The club returns to action Saturday against Taurean Green (U of Florida) and Limoges.

Watch below as The Dagger delivers from the corner to top off a 19 point game in November 2013: 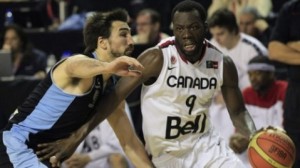 2004 National Champion Denham Brown was selected by the Seattle SuperSonics with the 40th overall pick in the 2006 NBA Draft. Since then, he has been back and forth between the NBA D-League, Europe and South America. Brown played the first half of the 2006-07 season with the Tulsa 66ers of the D-League averaging 18/5 before heading across the pond to Cantu of the Italian Series A league- electrifying fans with his athleticism (see below). Brown bounced around for the next few years with stops in Utah, North Dakota, Iowa (all D-League), Philippines, Poland, Ukraine, Canada and finally Argentina in 2012. His best all-around year during that stretch came in 2010-11 when he registered 13 points, 6 rebounds, 3 assists and 1 steal in 20 games for Ukrainian club Dnipro of the VTB United League. Brown has spent the last two seasons in the Romanian National League, last year with Timba Timisoara (17/8 in 19 games) before transferring to Targu Mures for the current season. Through 6 games Brown is averaging 13 points and 5 rebounds per game for the 2nd place club including a 19/8 effort this past Saturday. He returns to the hardwood this Saturday for a match-up against Pitesti and former URI forward/New Haven native Lamonte Ulmer.