4:15- Who had a more impressive championship run, Kemba or Shabazz?

19:25- Imagine a Final Four of all UConn Championship teams- who wins?

7,000+ crowded Mohegan Sun Arena Friday night for the 2014 Jim Calhoun Celebrity Classic. Featuring heroes of UConn past, the game is more than just a UConn All-Star game, but raises money and awareness for the Pat and Jim Calhoun Cardiology Center at the UConn Health Center. According to their website, the charity is dedicated to “research on new non-invasive techniques to diagnose and treat patients at risk for heart disease and also endows a cardiology research fellowship.” Since 1999 the Celebrity Classic has raised over $6.5 million for cardiology research. You can learn more here and like the event on Facebook.

Friday’s game featured current NBA players Andre Drummond, Ray Allen, Kemba Walker, Jeff Adrien, Ben Gordon, Jeremy Lamb and Charlie Villanueva as well as former stars Taliek Brown, Khalid El-Amin and Donyell Marshall. The White Team came away with a dramatic 114-112 victory on an all-but-too-familiar game winner from ’99 Champ El-Amin. Drummond led a stacked White Team with 24 points/12 rebounds while Walker (21 points), DeAndre Daniels (18), Allen (15) and El-Amin (13) all scored in double figures. Villanueva led the Blue Team dropping 24 points with Rashad Anderson (22), Lamb (21 points/8 rebounds) providing help in the scoring department and Jeff Adrien (12/13) handling the dirty work as usual. Lamb was originally on the White Team roster but crossed sides after Rudy Gay was was deemed ineligible due to language in his contract with the Sacramento Kings. It should be noted that although Gay was unable to participate in the game, he is rumored to have dropped $80,000 on a private plane to sit on the bench and support the cause. Caron Butler and Shabazz Napier were not in attendance due to prior commitments. 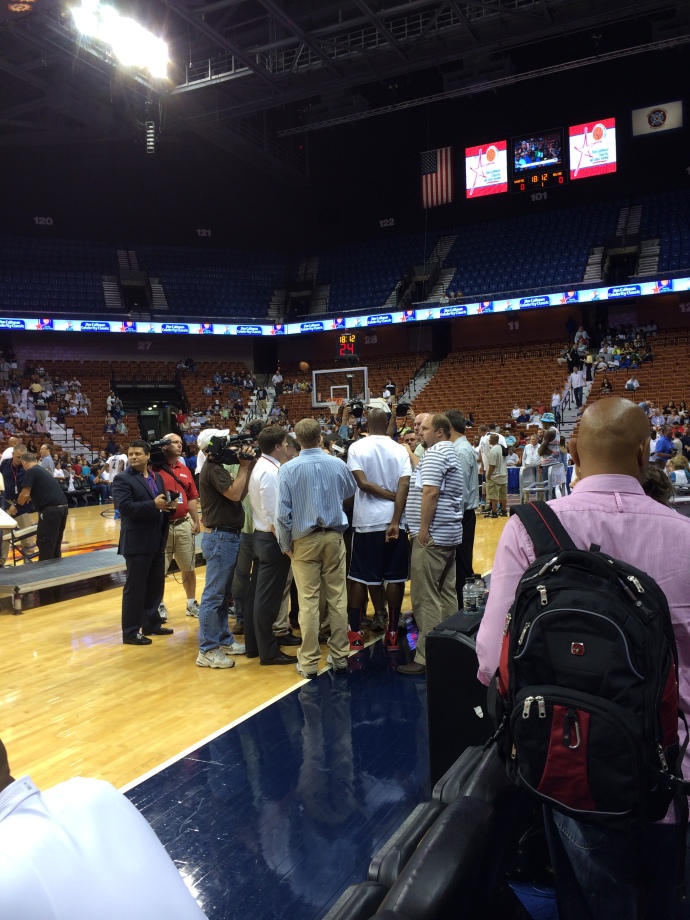 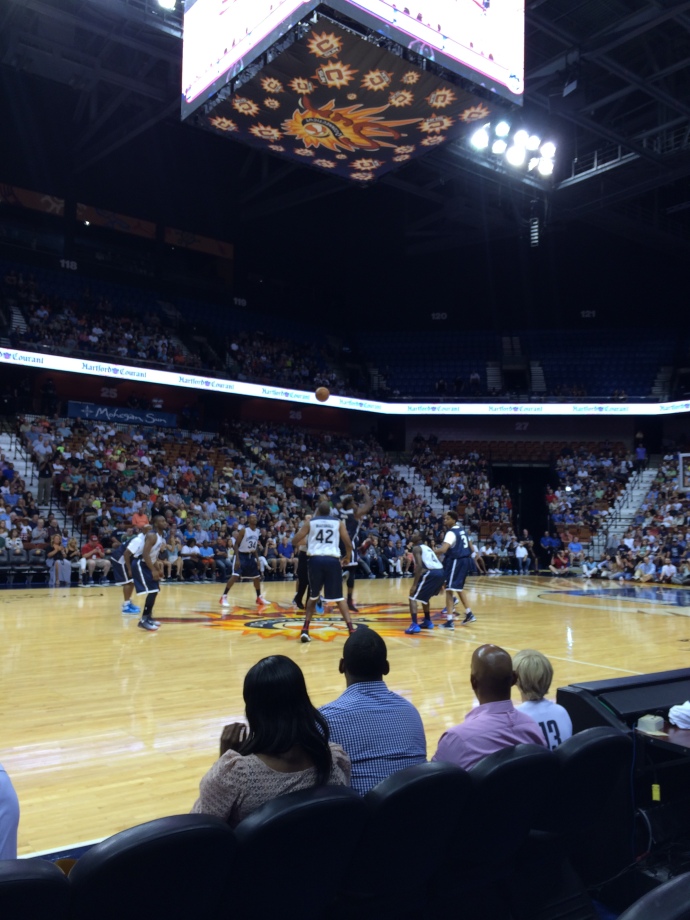 Tip off at the 2014 Jim Calhoun Celebrity Classic.

Andre Drummond rises for a dunk at the 2014 Jim Calhoun Celebrity Classic.

Rudy Gay poses for a selfie with Jeremy Lamb.

After party with Kemba Walker

Madison Square Garden. 33rd and 7th. New York, New York. The World’s Most Famous Arena. The Mecca. The Garden. Home to the Big East Tournament featuring perennial powers: Creighton, Butler, and Xavier. No, that is not a typo and yes, this is what it has come to. I couldn’t help feeling angry and even a little ripped off last night watching the Georgetown-DePaul first round game while UCONN waits 1,000 miles away in Memphis. Coinciding with my March 10th birthday it’s no surprise that tickets to the Big East Tournament topped my birthday list each year. Beginning in 2003 with a quarterfinals matchup against Seton Hall and ending in the magic that was “5 Games in 5 Days”, this is what nine straight years of Big East Basketball at Madison Square Garden meant to me:

You step off 7th Ave, out of the concrete jungle into a different type of jungle. In this jungle, the Husky is at the top of the food chain. You are greeted by chants of marching bands and cheerleaders leading their respective fight songs in unison. If you time it right, you walk in just as the UCONN fight song begins, making quite the entrance.
You pray your scalped ticket scans and start brainstorming backstories if it doesn’t. It scans, you’re in. Spiraling upward you take escalator after escalator passing Boston College, St. John’s and even a few Seton Hall fans- not caring who they are, just knowing you don’t like them. You catch a glimpse of orange in your peripheral and immediately cringe, hoping its a carrot. It’s not. It’s an orange. Any other time of year you like oranges. Oranges are sweet and juicy, but not March oranges. March oranges are sour. Sour from defeat you assume but you can’t be sure.
You take your seat. Rutgers scarlet to your left, Virginia Tech maroon to your right. You breathe a sigh of relief, they won’t give you much hassle. They CAN’T give you much hassle. You are UCONN, they are afraid and they should be. You briefly consider hassling them but quickly drop the notion, besides, you are with your family. The national anthem plays, the game has begun. You want to cheer as loud as possible after another turnover vs West Virginia, however, as a seasoned vet you know to save your voice for the inevitable date with Pittsburgh. Rival fans tire at another Taliek assist, Gordon three, Okafor block or Kemba step back but you do not, in fact, you could watch six overtimes worth.
The buzzer sounds. You live another day. As you take the escalator down you see fans of all colors. Losers avert your glare but tomorrows opponent meets your stare with a similar confidence. Not for long, you think. You exit the turnstiles into the City that Never Sleeps and a new challenge: waking up for tomorrows game.
On this night, the city is yours.