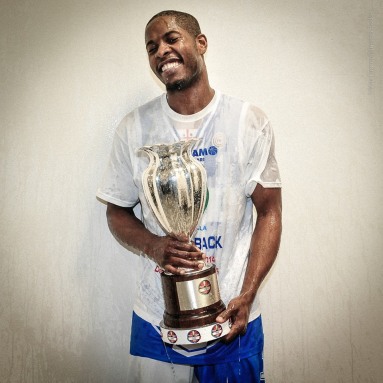 In a highly entertaining game featuring multiple former Big East stars- Dyson, Edgar Sosa (Louisville), Rakim Sanders (BC/Fairfield) and eventual MVP David Logan (Indianapolis) got the best of the Euroleague team from Milan boasting MarShon Brooks (Providence), Samardo Samuels (Louisville) and Daniel Hackett (USC) behind 14 three-pointers. In a game of runs, Brooks (18 points) sparked a furious comeback in the final minutes, but it was not enough to unseat the defending champions. In typical Dyson fashion, Rome sliced and diced his way to the free throw line 16 times- more than the entire Milan team! It helps, of course, when you can make shots like this…

Jerome Dyson with CIRCUS SHOT and One https://t.co/dOZQpNMPBk

Also, check out this cool behind the scenes look at the championship game below.

The Italian Cup win gives Sassari a chance at their second Italian Supercup- the first coming earlier this season with Dyson earning MVP honors. I have always wondered what could have been in 2009 had UConn not lost Dyson to injury…this certainly doesn’t help.