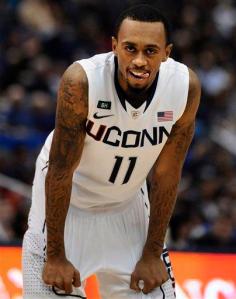 November is here once again which means the return of my favorite season, college basketball. Here are a few keys for UConn to repeat as National Champions. It starts (and ends), of course, with point guard Ryan Boatright.

This is finally Ryan Boatright’s team. Two years ago, I would’ve cringed at this idea but today I am much more comfortable given his progression. Here are two subplots to look for concerning Boatright this season:

We know Boat can drive, we know Boat can defend- but can he lead? This is the most important question of the season and in my opinion, the biggest indicator of success. If you look at the last two National Championship runs, it was not the tremendous play of Kemba and Shabazz that made the difference but the leadership they exhibited. Both were able to elevate the performance of their teammates, whether it was making the extra pass or an inspiring defensive stop. A telling sign will be body language. Pay attention to Boatright after a missed defensive assignment or botched layup- does he throw his hands up in disgust or encourage his teammate with a pat on the back? We need the latter.

I think we can all remember the painful offensive sets in the beginning of the Napier/Boatright years- long possessions ending in a deep 3 or forced drives into traffic trying to draw contact. Either way it hurt the eyes to watch. It took Boatright and Napier 2.5 years to learn to complement each other. Boatright and Purvis don’t have that luxury. While Purvis could not suit up for the Huskies last year following his transfer, he practiced with the team everyday which should eliminate some of the learning curve. We need both to perform, but most importantly, we need them to complement each other.

Last year we were the Hungry Huskies, the underdog, the misfits. This year, as defending National Champions, the expectations are much higher. Playing as the underdog is much different than playing as the defending National Champions. We have a target on our back. It is essential we keep the same hunger while avoiding a championship hangover. Humble Huskies. With Kevin Ollie behind the wheel you know we will defend and you know we will compete, that is a given. However, with different pieces than last year it remains to be seen how the puzzle fits together. Early season tests against Duke and Florida will be a good gauge.

We need to defend and we need to rebound for 40 minutes over a span of 6 months. It doesn’t matter who the production comes from, it just needs to be there night in and night out for the duration of the season. It could take the whole season to learn the shape of the puzzle but we know the result when all pieces fit come tournament time.

Amida Brimah is good. Really good. We know Brimah can defend the basket but can he do so without getting himself in foul trouble? If so, he has the potential to be a lottery pick in next years NBA Draft. If not, Philip Nolan, Kentan Facey and newcomer Rakim Lubin will need to pick up the slack. Keep a close eye on the Brimah- Jahlil Okafor matchup when UConn battles Duke in mid-December. Every big time player has a breakout game against a big time talent on a big time stage (Kemba in Maui, Bazz vs Florida). This could very well be Brimah’s coming out party.

In 2011 we lost 4 out of 5 games entering postseason play. In 2014 we were manhandled by Louisville before the AAC tournament. As any season, this season will have its highs and lows. A team is not defined by their lows, a team is defined by their response. I am less concerned with the blowout loss and more concerned with the attitude at practice the following day. Resiliency starts with leadership which brings us back to my first point: Ryan Boatright.