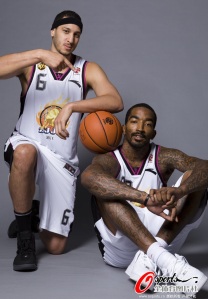 If JR Smith is the only recognizable face in the picture above, do not be alarmed, even die hard UCONN fans would have a hard time identifying Josh Boone without his signature braids popularized during his days of dominating the Big East paint. Boone shed his cornrows back in 2010 following a move to China for the sheer hassle of finding someone to do them. The 23rd overall pick in the 2006 NBA Draft, Boone put together four solid seasons with the Nets -including a 2007-08 season that saw him average 8 points/7 rebounds in 53 starts- before signing with the Zhejiang Chouzhou Golden Bulls of the Chinese Basketball Association (CBA).

Boone averaged double doubles in both his seasons in China- quite the accomplishment considering he played the 2012 season with JR Smith as his American counterpart (Smith averaged 35ppg with four 50+) and could only suit up for half the game*. He was interviewed in 2011 by ESPN for advice during the heat of the lock out as NBA players mulled overseas options- the article can be found below. Sifting through Golden Duck highlights uncovered some interesting matchups, notably a December 2011 game against the Beijing Ducks that featured JR vs Stephon Marbury and Josh Boone vs Randolph Morris (Kentucky→NYK). If you thought JR’s shot selection is awful now- check out these highlights:

At 28 Boone decided to make his comeback to the NBA, signing with the Iowa Energy but suffering a season-ending knee injury just 2 games into the season. He tried his luck with the Washington Wizards this summer but the two mutually parted ways after the injury swelled up, deciding Boone needed time to heal the injured knee. Boone was quoted following camp,

“I just have to work harder, the NBA is all about who works the hardest. Everybody in the NBA can play and there are a ton of guys who aren’t in the NBA that can play. I saw that from going overseas. It’s just a matter of getting in the right situation and making sure you stick. Get better every game. Play defense hard as I can.”

Working in Boone’s favor is his defensive prowess and status as a knowledgeable veteran, two desirable commodities in a center. Hopefully 2014 brings health and another NBA opportunity to one of the most physically imposing big men ever to play for the Huskies.

JR oops to Boone in China (sorry for the low quality)

*CBA allows only two import players per team and restricts the total amount of time they can be on the court to 75% of the game. Analyzing the minutes distribution for a few teams showed big men (Boone) would typically sit out the entire first half then play all the 3rd/4th while guards/wings (JR) played the duration of the game. 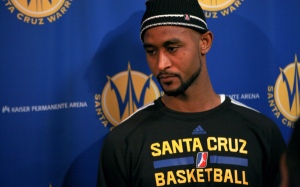 Hilton Armstrong’s road to NBA lottery pick did not follow the typical trajectory of other notable UCONN big men. In fact, chants of “Trans-fer Hil-ton” rang out each time he stepped on the court during a miserable freshman-junior years in Storrs which saw him average under 4 points per game. His senior season marked one of the biggest transformations, possibly in UCONN history, as Hilton garnered Big East Defensive POY award and was selected by the New Orleans Hornets with the 12th overall pick in 2006. Armstrong was projected to be an immediate contributor for the Hornets however his progression was stymied when the team traded for All-Star center Tyson Chandler. Fighting for minutes with an All NBA Defensive player, Armstrong’s production was limited and he was dealt to the Kings in 2010. Armstrong spent the next few years bouncing around to various NBA teams featuring stints with the aforementioned Kings, Houston Rockets, Washington Wizards and finally the Atlanta Hawks posting career averages of 3.2ppg and 2.6rpg AND ONE BIG STEAL (below) in 265 games.

Hilton took his talents/trickery across the pond for the 2011-12 season signing with Tony Parker’s ASVEL of the French Pro Series A League/Eurocup. Hilton averaged 10 points/7 rebounds playing alongside Parker, the owner of the club who signed himself to a $2,000/month contract during the NBA lock out. The first minute of the clip below shows Armstrong’s highlights in France -Parker to Armstrong connection at the 1 minute mark-continue watching for Parker’s top plays.

After just one season in France, Hilton again jumped all over the world spending time with Greek powerhouse Panathinaikos, Santa Cruz Warriors (D-League), Changsha Bank (China), Indiana Pacers and finally finishing the 2012-13 season with Santa Cruz. Armstrong’s strong play led him to receive Honorable Mention All-NBA D-League and Second Team All-NBA D-League Defensive team honors. 2013-2014 has been no different for Hilton as he heads the Santa Cruz frontline putting up numbers of 15 points/7 rebounds/3 blocks. In December he became the 19th D-League call-up in Golden State history providing much needed front court depth to a Warriors team plagued by injury. Back in the D-League Hilton has been selected to represent Santa Cruz at the 2014 NBA D-League All-Star game in New Orleans. The game will be aired live on NBA TV at 3pm tomorrow February 15th. If NBA TV is not available, see what you are missing with Armstrong’s D-League highlights below (my personal favorite is the second dunk over Fab Melo)…

Lietkabelis took advantage of 58 points in the paint to dismantle #11 LSU-Atletas by a score of 93-71 in Round 19 play. The game was not only a big road win for #10 Lietkabelis but also put them another game ahead of last place LSU. The victors controlled the glass by a 44-30 margin, neutralizing 7’3 center and LKL leading rebounder Tomas Urbonas. Russian center Ivan Nelyubov had a huge game for Lietkabelis, leading the team with 32 points and 8 rebounds. Ryan Olander contributed 4 points and 3 rebounds while American newcomer Darrick Leonard (Aurora College) finished with 2 points/5 rebounds in his first game.

In Round 20 action, Lietkabelis held on for a 85-77 home victory against #9 Dzukija. The win had playoff implications for #10 Lietkabelis, putting the club within one game of Dzukija as both teams battle for the last postseason berth (top 8 advance). Russian center Ivan Nelyubov tallied a double double for Lietkabelis (20/11) while American Darrick Leonard chipped in 19/9 off the bench. Ryan Olander added 16 points on 6-9 shooting (including 2 3’s) and 6 rebounds (4 offensive) for a 16 efficiency rating. Lietkabelis returns to the hardwood February 18th against #1 seed Tonybet in an attempt to continue their climb in the standings. Tonybet has defeated Lietkabelis in all three meetings this year by an average score of 15.

Check out this big dunk by Olander during a recent BBL match up (20 second mark):